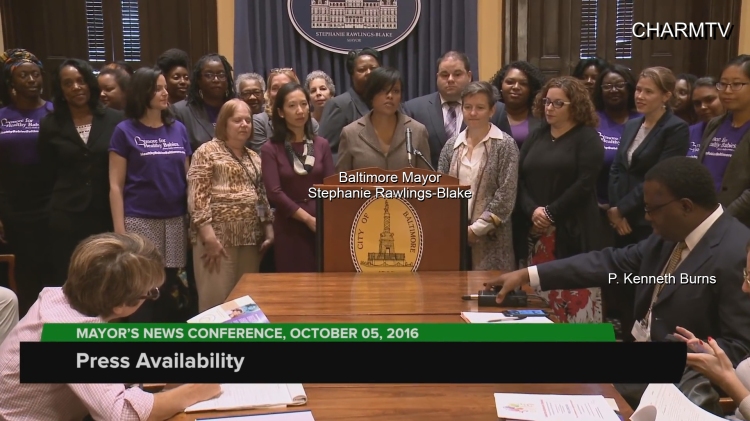 “I know Kenny’s not the cuddliest reporter, but it’s beyond my comprehension that an elected official thinks that she can do that.”

This section of my website is an attempt to counter Google.  It is to give an account of my being banned from ONE news conference – a weekly briefing – during the waning days of Baltimore’s 49th mayor, Stephanie Rawlings-Blake.  It is important to tell my view of this event in addition to thoughts that I could not share while Rawlings-Blake was still in office.

On Tuesday, Oct. 11, 2016, I was informed by Anthony McCarthy, director of public affairs for Mayor Stephanie Rawlings-Blake, that the mayor “declined to grant her discretionary access” to me to attend her post-Board of Estimates news conference “indefinitely.”  As you will see in the notice (below,) there was no reason given.

McCarthy said in the accompanying email that “WYPR may send another reporter to participate in this weekly press availability.”

The following morning, Joel McCord, WYPR News Director, went in my place to ask why was I banned.  That was when McCord, myself and my employer was informed of the reason I was banned.

According to the mayor, I had “consistently exhibited verbally and physically threatening behavior, particularly to [her] staff.” (video below)  No evidence has been presented to my employer or the public as of the day this was written (Dec. 27, 2016.)

Another thing happened on Oct. 12; WBFF (FOX 45) presented the mayor’s office with a request for information through the Maryland Public Information Act, MPIA, asking what did I do to the mayor and her staff that warranted a ban.

While that request was made, Rawlings-Blake doubled down on her ban of me.  Those tweets have since been deleted; but have been preserved below. 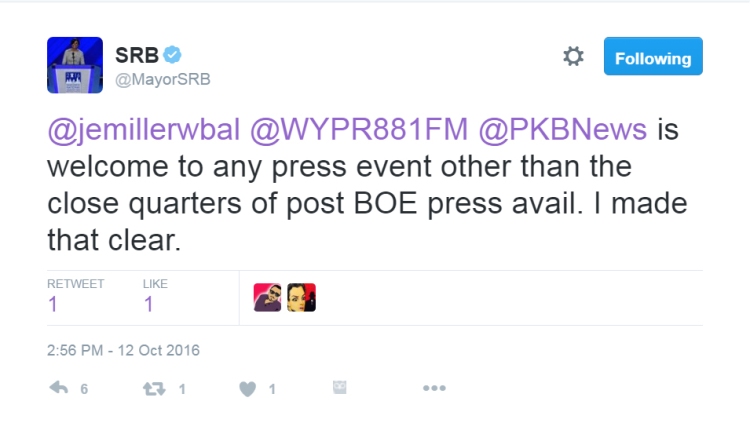 At the same time, friends and colleagues past and present defended my honor and my character.  #FreeKenny became a trending hashtag in Baltimore.  Also within that week, the editorial boards of The Baltimore Sun and The Daily Record wrote editorials on my behalf.

More than a month later – Wednesday, Nov. 23 – I received a direct message from Paul Gessler at FOX 45 who wanted me to react to the mayor not answering questions about their MPIA request and her allegation against me.  I drove up to FOX 45 for the interview.

State government entities must respond to requests in 30 days.  If the request is going to take longer than 30 days; they must ask for more time from the requester.

In this instance, the mayor’s office did not give any response to FOX 45 in 30 days.  When asked about it, the mayor side stepped the question and referred the station to my employer.

Here’s @MayorSRB, @PKBNews, and the mayor’s spokesperson, Anthony McCarthy today on the incident and failure to fulfill the PIA. pic.twitter.com/P2Uwn5swSV

FOX 45 eventually received an answer at the end of November; more than six weeks after the MPIA request was made.  There were no records responsive to their request.

So Gessler went directly to Mayor Rawlings-Blake and asked what she is alleging.  She once again referred such questions to my employer.  And it was promptly shut down by Anthony McCarthy.

This story would go away a lot faster if @MayorSRB would ever explain what @PKBNews allegedly did to warrant a ban. pic.twitter.com/Pir7kgweVm

Gessler reported Dec. 1 that the ban was done without any communication among staff.

“Whatever is said to have happened was severe enough to ban Burns from her media briefing.  But there’s not one email or text among the staff regarding the alleged threat.  The mayor’s aide, Anthony McCarthy, confirmed that to us.”

My ban was lifted upon Mayor Rawlings-Blake leaving office Dec. 6.  I was allowed to return doing my job and no longer being the story.

@PKBNews back at mayoral briefings. Ban by previous mayor kept him away for weeks. pic.twitter.com/0uIxIwb2dv

Click here to see answers to some often asked questions.

Click here to find out what happened between myself and WYPR afterwards and during my tenure there.