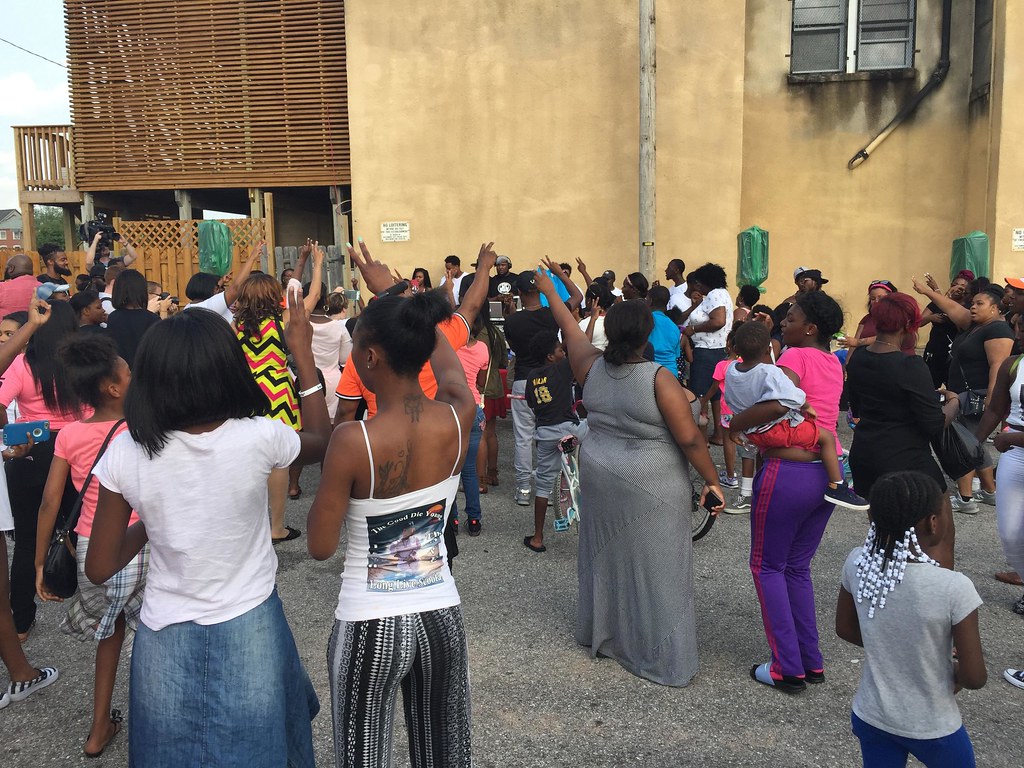 Baltimore’s farewell to local rap artist Tyriece Watson took a New Orleans flavor Friday; a somber funeral in the morning at the Empowerment Temple AME Church in Park Heights and an upbeat community repast in the afternoon at Pennsylvania Avenue and McMechen Street. But instead of jazz, the music was hip-hop.

Watson, known as Lor Scoota, was shot and killed June 25 as he was leaving a peace rally at Morgan State University. Police continue to look for a suspect in his murder.

The threat of rain was not going to stop anything.

“If it starts raining out here, for real, we partying in the rain,” the DJ told the crowd.

The rain held off. And the crowd celebrated the life and legacy of Scoota; a son of Baltimore who not only remembered where he came from but chronicled that life.

“He was a young artist who came up in Baltimore that really took the youth and the new generation and advocated for them,” said Daniel Burton who added Scoota was “a good guy.”

Dashane Woodson was in jail the day Scoota was killed and was released Monday the day of his vigil. For him, Scoota was a motivator.

“He came from nothing; for real, for real,” Woodson said. “He show you that you can make it out; you feel me? You got believe in yourself.”

Woodson also said he is going to Job Corp for two years and work towards becoming a doctor.

The repast was about positivity and healing for people who held Scoota in high regard. Police officers took part in the celebration. They brought water for the coolers and charcoal for the grill.

Police Commissioner Kevin Davis said it was important for him to be there personally as well as his department.

“It’s more important for [people] to see police officers who patrol their communities interact with them in a respectful way each and every day,” he said.

The officers, who Davis said was there to be peacekeepers, were engaged with the community. One officer took pictures of the repast. Others waited in the food line for burgers and hot dogs to come fresh off the grill of Duane “Shorty” Davis; a community activist who makes his living by cooking. And he doesn’t mind sharing his craft where there is positivity in the community.

“I cook for the homeless; I cook anywhere; I do free books and barbeque. We’ve given away over 100,000 books in eight years,” he said.

Davis says he wants the image of Baltimore from “The Wire” to change and see young people improve their lives.

“I want the young people to learn that they can come to the older people and see there’s a better way of life,” he added. “To do better, you got to see better. And that’s the only way you gonna change; we have to show’em better.”